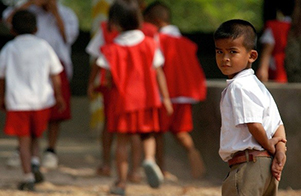 We all have had at least one role model in our lives. Role models are important to our psychological well-being because they help us guide us through certain decision making processes that can ultimately affect the outcome of our lives. Children often have many choices when it comes to choosing role models – most often their first role models are parents followed by other adults and relatives, such as teachers.

Role models should be a point of inspiration and give us an idea of how we should behave no matter the situation. This is why it’s very important for a potential role model provide good behavior – behavior that children can imitate without repercussion. There are many choices when children are younger, however as they grow older it can become more difficult for good role models to be found.

Helping your child choose a role model involves finding a person who has good morals, doesn’t take part in behavior that is self-destructive, is hard working, creative and free thinking. And yes it’s true that you can’t pick the role model your child emulates, you can do your part to make sure they are exposed to the type of people who would make good role models to begin with.

Your child’s role model doesn’t have to be Superman or someone famous – in fact, a celebrity may not always be a good choice as many tend to indulge in self-destructing behavior or take part in behavior that is just unsavory to begin with. A good role model will be someone who is similar to you.

When your child has discovered that he or she has a role model, it’s important for you as the parent not to put this person on a pedestal. Role models are human and as such subject to failure and mistakes. You can recognize this person as a guide for the behavior you would like your child to imitate but not necessarily someone your child should act like exclusively.